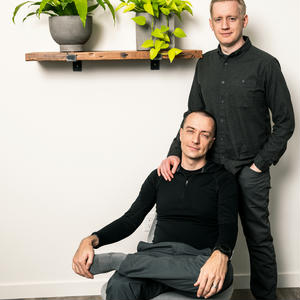 I'm the guy on the left.

I'm a software engineer and sometimes manager working on Chrome Security in Mountain View, California, USA. Before that, I worked on Chrome OS, Android Pay, and Zavers in Boulder, CO.

Like most people, I like to pass the free time with friends, my husband (Brandon S. Ward), and our dog: hiking, cooking, board games, and watching entertainment. Our dog snoozes nearby for the last two of those. I organize a science and sci-fi book club that meets online. We read about one book per month.

In former lives, I had a radio show, was a GNOME module maintainer, published a book on Ruby, and worked in Beowulf computing.

The title of this blog is a reference to the philosopher Robert Nozick's thought experiment as a critique of utilitarianism. Quoting Wikipedia:

The argument goes: utilitarianism will lead to warehouses full of people being pumped full of happy juice, against their will, because that's the most morally righteous thing to do. The thing is, though, we haven't seen any utility monsters in practice and governments would do well to try to increase the happiness of their citizens. Quoting Steven Pinker writing, in Enlightenment Now, defending humanism and utilitarian thinking:

The other reason that humanism needn’t be embarrassed by its overlap with utilitarianism is that this approach to ethics has an impressive track record of improving human welfare. The classical utilitarians—Cesare Beccaria, Jeremy Bentham, and John Stuart Mill—laid out arguments against slavery, sadistic punishment, cruelty to animals, the criminalization of homosexuality, and the subordination of women which carried the day. Even advanced on utilitarian grounds. And, at least so far, Utility Monsters and rabbit gratification factories have not turned out to be a problem.

Also, I like the idea of "monsters" as representations of our fears and weaknesses as popularized by Lady Gaga as "the way that fame is a monster in society" but also its many pitfalls. It's a good reminder that it's better to be safe than famous. In another example of art influencing science, some scientists have named a species of fern after Lady Gaga's formulation.

Finally, as a society, we have turned monsters into cuddly, friendly things that we use in the context of children's and other PG-content. (For example, the Monsters Inc movies and a slew of children's books.)

So, the title is play on these themes: the content should be useful and fun, but not self-obsessed and selfish.

IRC: jclinton on GIMPNet, Freenode (not on there very often, these days)